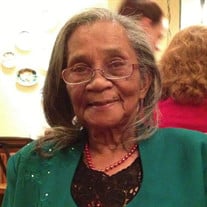 Ada Mae Heckstall Freeman was born January 13, 1929 to the late Belva Heckstall Hoggard in Windsor, NC. She peacefully departed this life on January 30, 2020. At an early age, Ada found the LORD and joined Sandy Point Baptist Church. In her youth, she migrated to Ahoskie, NC and there she met and fell in love with, the love of her life, Ralph Freeman. As Ada continued to grow in the Lord, she joined Holy Light Church of Deliverance. While there, she continued to serve the Lord as a Sunday School teacher, Missionary, Treasurer, Minister, and Mother of the church. She lived with dignity, a devoted life to the Lord, family, friends and the community. Ada's love was a true testament of love, that is patient, kind and strong. After Ada married the late Ralph Freeman on August 26, 1951, they made their home in the neighborhood of Carver's Park of Murfreesboro NC. From this union, 10 children were born as well as a granddaughter of whom she raised and loved as her 11th child. She was preceded in life by Belva F. Freeman, Ralph Freeman, Chauncey Freeman, and Angela Green. She leaves behind her children to carry on her rich legacy: Rodney, Greta, Yvonne, Sandy, Ralph, Terry, Lesa, Tearle, and Keshana.To further honor her memory, Ada leaves behind her sisters: Viola and Helen; and was preceded in life by sisters Beatrice and Shirlene. Her brothers are John, Henry, and Earnest and the late William and Clarence Cooper. She left a rich legacy of love with a host of grandchildren, great-grandchildren, nieces, nephews, and cousins. Her life devoted to the Lord left a host of spiritual children throughout the entire community of Murfreesboro.

The family of Ada Mae Freeman created this Life Tributes page to make it easy to share your memories.

Send flowers to the Freeman family.