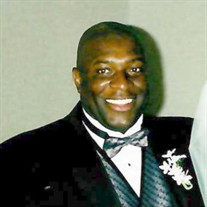 Today we honor the life and celebrate the Homegoing of a loving and caring man, Allen Randolph Charity, Sr, who entered into eternal rest on Wednesday, February 3, 2021. Allen, affectionately known to family and friends as "Duma", was born on June 10, 1959 in Ahoskie, North Carolina to the late Doris Porter Charity and James (Johnny) Charity. At an early age, Allen gave his life to Christ and became a faithful and active member of Jordan Grove Missionary Baptist Church. Allen attended Hertford County Public School and graduated from Murfreesboro High School. He was an avid sports fan and an awesome point guard for Murfreesboro High School's basketball team. Allen also assisted Coach Bernard Reynolds in coaching at Atlantic City High School in Atlantic City, New Jersey. As everyone knows, Allen was a die-hard Dallas Cowboys fan. Allen sought employment and found work at Carolina Aluminum in Winton, North Carolina, and later the Town of Winton. After working with the Town of Winton, he found employment at the Smithfield Meat and Packing Company in Smithfield, Virginia where he worked until failing health. Allen was humble and very caring. He was a "one of a kind' type of guy, a joy to be around and never too busy to help others in the community or where ever help was needed. One would say, and agree, Allen never met a stranger. He was fun and loving and a friend to everyone. He was a genuine lover of people with a heart of gold. He cherished and loved family, church and friends. He especially loved social gatherings where there was plenty of good food and much laughter. Allen was preceded in death by his mother, Doris Charity; his father, James (Johnny) Charity his brother, Larry Charity; and his nephew, Dante Harris. Allen leaves to cherish his memories: his wife, Brenda Morris-Charity of Raleigh, North Carolina; his son, Allen Randolph Charity, Jr. of Meriden , Connecticut; step-daughter, Tasha White; brother, Fredrick L. Charity (Daphine) of Richmond, Virginia; devoted friends and "Second Mom", Mrs. Virginia Reynolds; grandchildren, Allen Randolph Charity, III and Averii Ryan Charity, Chase White and De'Andra White; nephew, Antonio Marsden; great-niece, Aleana Harris and a host of relatives and friends.

Today we honor the life and celebrate the Homegoing of a loving and caring man, Allen Randolph Charity, Sr, who entered into eternal rest on Wednesday, February 3, 2021. Allen, affectionately known to family and friends as "Duma", was born on... View Obituary & Service Information

The family of Allen Randolph Charity Sr created this Life Tributes page to make it easy to share your memories.

Today we honor the life and celebrate the Homegoing of a loving...

Send flowers to the Charity family.