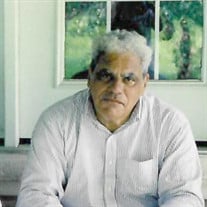 Allen James was born on February 16, 1945, in Portsmouth, Virginia, and died at the Veterans Administration Hospital in Washington, D. C. when the Lord called Allen home on October 27, 2020. Allen was born to the late Robert James and Doris Pierce James. Allen was reared in a Christian home where he attended the Portsmouth Public school system. After completing his high school education, Allen enlisted in the U.S. Navy, served for several years, and received an honorable discharge. After leaving military service, Allen was employed with the District of Columbia Housing Authority in Washington, D.C. for 35 years until retiring. While employed, Allen met Gerline Harris, they were later married and continued to reside in Washington, D.C. Allen was an avid sports fan and enjoyed watching his favorite team, the Washington Football Team, formally the Redskins. He also enjoyed watching boxing matching after engaging in amateur boxing while in the Navy. Allen also enjoyed watching classic movies and was somewhat of a movie critic. Allen enjoyed reading the newspaper and was always up on current events, especially the D.C. politics. Allen enjoyed living in Washington, D.C. especially when he and his brother Coolie spent time together. He also met many people there who were supportive of him during his long illness; he was affectionately known as Mr. Jimmy. Allen loved spending time with his family and friends and enjoyed attending family reunions in North Carolina, Thanksgiving, and Christmas holidays and special occasions. Allen is preceded in death by his father and mother, Robert and Doris James, his sister, Iris Jean James, three brothers, Robert, Calvin (Coolie), and Luther Earl James. In addition to his wife, Gerline, left to cherish his memory are his sisters, Frances, Carol, LaVern, and Gail James; two sisters-in-law, Carolyn (Robert) and Collen (Luther Earl) James, one nephew, Calvin Rush, two nieces, Chyrita Rush and Lisa James, several grand nephews and nieces, two aunts and one uncle and many cousins.

Allen James was born on February 16, 1945, in Portsmouth, Virginia, and died at the Veterans Administration Hospital in Washington, D. C. when the Lord called Allen home on October 27, 2020. Allen was born to the late Robert James and Doris... View Obituary & Service Information

The family of Allen James created this Life Tributes page to make it easy to share your memories.

Send flowers to the James family.