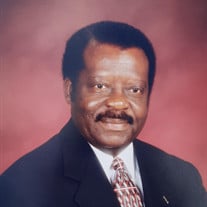 Benjamin Cornell Saunders, Sr. was born on September 16, 1939, to Mary Etta Eason Saunders and Oscar Cross Saunders. Raised in Sunbury, North Carolina, he joined St. John African Methodist Episcopal Zion Church as a youth and was a lifelong member. Benjamin graduated from T. S. Cooper High School in 1957. Even at that young age, “Scrappy” was a leader, acting as the Senior Class President. After graduation, he attended Elizabeth City State University, where he finished with a Bachelor of Science in Education in 1962. Shortly after college, Benjamin was drafted into the military. He spent the next two years of his life in Munich, Germany serving his country as a military policeman in the United States Army. Not long after his honorable discharge in 1965, his life would change forever. On August 20, 1966, Benjamin was joined in holy matrimony with Emma Aileene Modlin from Perquimans County (Winfall), North Carolina. They were acquaintances at Elizabeth City State University. She was his backbone and he credited her for his success and the rearing of their children. Through a connection from Aileene, Benjamin started his career as an educator with Pitt County Public Schools. After a year in Pitt County, he returned home to a position at T. S. Cooper Elementary School as a science and math teacher. After 13 years in the classroom, Benjamin was elevated to principal, where he served for the next 27 years. “Mr. Saunders” was passionate about education and wanted the best for his students and staff. He created a strong sense of pride for TSC and was tenacious in acquiring funding to support the best possible education for his students. Benjamin strived to reach unimaginable heights during his time with Gates County Public Schools. This required furthering his education. Since his alma mater did not offer the additional certifications that he desired, he attended East Carolina University. There he earned a Master of Arts in Education and an Educational Specialist Degree. The latter was referred to as the “superintendent’s degree.” Along the way, he also received various certificates, including one for completing the “Principals Executive Program” at The University of North Carolina at Chapel Hill. Benjamin was involved in many clubs and professional affiliations. They include the Noble Clan of Kappa Alpha Psi Fraternity, Incorporated (Life Member), Pride of Sunbury Masonic Lodge #401, American Legion Post #426, ECSU General Alumni Association (Life Member), Viking Varsity Club (Charter Member), National Education Association (NEA) (Retired Life), North Carolina Association of School Administrators, Gates County Social Services (Board Member), First Citizens Bank – Sunbury, North Carolina (Board of Directors) and College of the Albemarle (Board of Trustees). Benjamin Cornell Saunders, Sr. was predeceased by his father, Oscar Saunders; mother, Mary Saunders; and sister, Sylvia (Charles) Dark. Benjamin is survived by his loving wife of 54 years, Aileene; sons Jeffrey Johnson (Carolyn) and Benjamin, Jr. (Tiffany); daughter, Cynthia Cheatham (Eddie); and brother, William Kershaw Saunders (Mary). Five grandchildren; Terrell Johnson, Brittney Toribio (Aris Mendy), Edward Cheatham, Shauna Cheatham, and Jaylin Johnson and three great-grandchildren; Jamiyah, Keyorri, and Jameel. Visitation will be on Friday, November 13, 2020, from 3:00 PM until 7:30 PM. There will be NO VIEWING on Saturday, November 14, 2020.

The family of Benjamin Cornell Saunders Sr created this Life Tributes page to make it easy to share your memories.

Send flowers to the Saunders family.