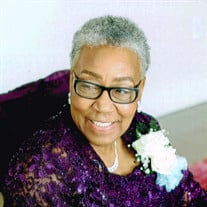 On the evening of Sunday, July 21, 2019, God's Heavenly angels escorted Bernice Virginia Lassiter Holley from labor to reward into the everlasting arms of her Savior. Bernice a long-time resident of Murfreesboro, North Carolina was a much loved and respected member of the community. She spent much of her life working in manufacturing and later years as a Home Care Aide. Bernice was formerly a member of Second Baptist Creeksville Church for many years, where she was a member of the choir. She later joined Nebo Missionary Baptist Church and remained a member until her death. Bernie was born in Ivor (Southampton Co), Virginia on January 17, 1941, to the late George Washington Lassiter and Willie Mae Artis Lassiter. She grew up with seven siblings on a farm. She was educated in Northampton County Public Schools. Bernice was married to George W. Holley and to this union six children were born. In 1985, she courageously and selflessly took on raising her two granddaughters. Bernice is survived by her children; John Junior Holley of the home, Patricia Holley-Johnson and Deborah Holley- Archer (David) both of Durham, NC; grandchildren that she raised, LaKeisha M. Holley Neal (Elvin) of Raleigh, NC and Bridgette Shanta Holley of Wake Forest, NC; as well as many other loving grandchildren and great-grandchildren. She is also survived by siblings, Joe Louis Lassiter (Mary), Bettie Jean Dukes (Arthur), Barbara Joyce Vaughan, and Thomasene Holley all of Murfreesboro, NC. She was known and will be remembered for her smile that lighted up a room, her attitude that enabled her to have a good time anywhere, and her one-of- a-kind laugh. She enjoyed cooking, dressing up, having yard sales, dancing, and serving others in the community.

On the evening of Sunday, July 21, 2019, God's Heavenly angels escorted Bernice Virginia Lassiter Holley from labor to reward into the everlasting arms of her Savior. Bernice a long-time resident of Murfreesboro, North Carolina was a much... View Obituary & Service Information

The family of Bernice Virginia Lassiter Holley created this Life Tributes page to make it easy to share your memories.

Send flowers to the Lassiter family.