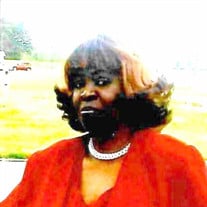 Betty Ann Futrell Bailey, was born in Southampton County on September 19, 1957, and transitioned to her Heavenly Home on October 6, 2020, at Vidant North Hospital. Betty Bailey (BB) was the 2nd eldest of seven siblings. She was very outgoing... View Obituary & Service Information

The family of Betty Ann Futrell Bailey created this Life Tributes page to make it easy to share your memories.

Send flowers to the Bailey family.