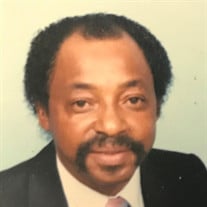 Caesar "Pete" Williams, Jr. died on Monday, December 3, 2018 at his home. He was born on October 21, 1946. He was a 1964 graduate of CS Brown High School, and a US Army veteran. He was the son of the late Cezar and Bernice Williams of Hertford... View Obituary & Service Information

The family of Caesar "Pete" Williams Jr created this Life Tributes page to make it easy to share your memories.