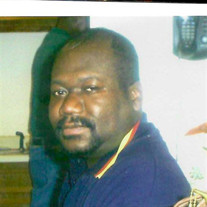 On Sunday, January 19, 2020, God summoned Calvin Faison to return back unto Him. Calvin Faison affectionately known to all as "The TV Man", was born on July 29, 1959 to the late Roscoe and Mary Faison of Murfreesboro, North Carolina. He... View Obituary & Service Information

The family of Calvin Faison created this Life Tributes page to make it easy to share your memories.

Send flowers to the Faison family.