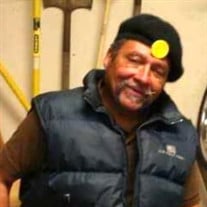 On June 12, 2021, a great man, and sadly the end of an era, departed this life on a journey to find eternal rest. Charlie Lee Parker, 65, was born on August 14, 1955, in Hertford County, North Carolina the late Lee Roy Parker and Clarice Manley... View Obituary & Service Information

The family of Charlie Lee Parker created this Life Tributes page to make it easy to share your memories.

Send flowers to the Parker family.