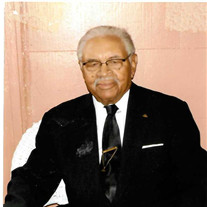 Deacon Clarence Lassiter, Sr. transitioned from his earthly life to his Heavenly Home on February 11, 2020 at the age of 96. He was born on April 2, 1923 to the late Russell and Obedila Lassiter in Rich Square, NC. He was born first of thirteen... View Obituary & Service Information

The family of Deacon Clarence Lassiter Sr created this Life Tributes page to make it easy to share your memories.

Send flowers to the Lassiter family.