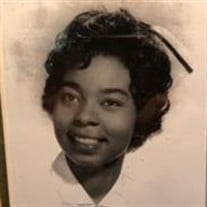 On Saturday, May 29, 2021 God called to his heavenly home, one of his own. Daisy Mae Vaughan Gallo, 81, of Murfreesboro, North Carolina passed away at Accordius Health at Creekside Care. Daisy Mae Gallo was born in Hertford County, N.C. on March 11, 1940. She was the eldest of six children born to the late William Fred & Daisy Earlene Vaughan. Daisy was baptized as a young child and became a member of New Haven Baptist Church. Her parents faithfully brought Daisy and the entire family to Sunday School and Church every Sunday. She graduated from C.S. Brown and continued her education by receiving a nursing degree from Bridgeport School of Nursing in Bridgeport, Connecticut. Daisy worked as a Registered Nurse for the Air Force Reserve and was honorably discharged. She moved back and forth across the country living in Virginia, California, and Massachusetts before settling in Murfreesboro N.C. Daisy worked for various hospitals as a Registered Nurse holding positions as Supervisor, Assistant Director of Nursing, and Director of Nursing. She also faithfully served as a nurse for the church for many years. Serving God was of the utmost importance in her life. She served as a missionary for many years and eventually started a prayer ministry and Bible Study from her home, which branched out into the community. Later she became an Ordained Minister of the gospel. While at the nursing home Daisy would often travel the halls with other elders, visiting residents, and spreading the gospel. Before becoming ill, Daisy took great pride in the beauty of her yard. She enjoyed planting flowers and the upkeep of her fruit trees. Daisy was married to Alphonse Millet and to this union Sheilah Millet Lewis and Stephen Millet were born. Later she married Allen Gallo (deceased) to this union Sevilla Gallo was born. After Sevilla’s untimely death, Daisy lovingly raised Sevilla’s daughter Audriana Gallo as her child. Daisy Mae Gallo is preceded in death by her daughters, Sheilah M Lewis and Sevilla Earle Gallo, her brother William Earl Vaughan. Daisy is lovingly remembered by her children Stephen Millet (Sonji) of Milwaukee, WI, Audriana Gallo of Murfreesboro N.C., two stepchildren Renard Gallo of Oakley, California, and Debrice Gallo of Antioch, California. Four sisters, Lillie Powell, Annie Whyte, Emma Vaughan, and Sharon (Leonard) Vaughan. Nine grandchildren, ten great-grandchildren and a host of nieces, nephews, cousins, relatives, and friends.

On Saturday, May 29, 2021 God called to his heavenly home, one of his own. Daisy Mae Vaughan Gallo, 81, of Murfreesboro, North Carolina passed away at Accordius Health at Creekside Care. Daisy Mae Gallo was born in Hertford County, N.C. on... View Obituary & Service Information

The family of Daisy Mae Vaughan Gallo created this Life Tributes page to make it easy to share your memories.

Send flowers to the Gallo family.