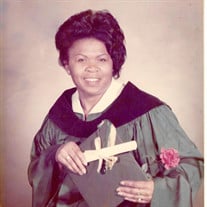 Dorothy Ann Vinson-Dorsey was born on October 5, 1938, in Hertford County, NC, to the late Donnie Vinson Jr. and Eleather Futrell Vinson. She was called home to be with the Lord on April 7, 2020, at BronxCare Health System in Bronx, New York. Dorothy attended school in Hertford County, North Carolina, then, at an early age, moved to Bronx, New York, to continue her education. Dorothy was an avid learner. Through hard work and perseverance, she obtained her GED, attended Bronx Community College and enrolled in their nursing program. After earning a Bachelor's Degree in Applied Science in Nursing, Dorothy became the head registered nurse (RN) at Montefiore Medical Center in Bronx, New York. In spite of a long and successful career as an RN, Dorothy returned to Bronx Community College where she earned a second Bachelor's Degree, in Human Services Technology. Returning to Montefiore Medical Center, Dorothy embarked on a second career as a social worker. She continued in social work for over 20 years until her retirement. For Dorothy, helping others was not simply a career choice, it was who she was as a person. So, not being a stay-at-home type, she became active in many religious and community organizations. She was a faithful member of Metropolitan Baptist Church in Manhattan, New York. She served as a trustee, Sunday school teacher, Pastor's Aide member, and assisted the food committee. She was also a member of The Star of Bethlehem Grand Chapter of the Eastern Star where she was a Worthy Matron. Dot, as she was known to her family, leaves to cherish her memory: five (5) brothers: David (Chong) Vinson, Haymarket, Virginia; Joseph (Jeanette) Vinson, Murfreesboro, North Carolina; Jacob (Betty) Vinson, Norfolk, Virginia; Lee {Freda) Vinson, Murfreesboro, North Carolina, and Donald Vinson, St. Johns, North Carolina; three (3) sisters: Elenia Hardy, Ahoskie, North Carolina; Shirley (Johnny) Tyler, Menola, North Carolina, and Phyllis Vinson, St. Johns, North Carolina; one adopted sister, Betty Middlebrooks, Bronx, New York; and a host of nieces, nephews, relatives and friends. Dorothy was preceded in death by her husband, Daniel Dorsey, her son, Willie Clay Parker Jr., her brother, Kenneth Vinson and two (2) brothers-in-law, Winfred Hardy, Jr., and Larry Parker.

Dorothy Ann Vinson-Dorsey was born on October 5, 1938, in Hertford County, NC, to the late Donnie Vinson Jr. and Eleather Futrell Vinson. She was called home to be with the Lord on April 7, 2020, at BronxCare Health System in Bronx, New York.... View Obituary & Service Information

The family of Dorothy Ann Vinson-Dorsey created this Life Tributes page to make it easy to share your memories.

Send flowers to the Vinson-Dorsey family.