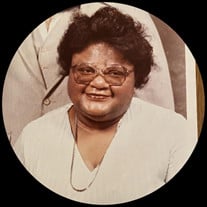 Obituary On Monday, November 30, 2020, our Heavenly Father called our beloved one, Miss Evelyn Vinson, home to rest with Him in eternal glory and peace. Daughter of the late Mr. Elijah Warren Vinson and Mrs. Beulah Mae Artis Vinson, Evelyn Vinson entered this world on January 6, 1954, in Hertford County. Realizing she would have to answer the call to go home one day, Evelyn joined First Baptist Church of Severn early in life. However, feeling a void in her life that church nor mankind could fill, Evelyn accepted Christ Jesus into her life as Savior during 1970 while watching a Billy Graham Crusade. Later in life, she asked to be baptized as evidence to the world that she was a new creation in Christ. While able, Evelyn was a faithful member of First Baptist Church Severn. She served as Secretary and choir member for many years. Evelyn loved to lift her voice in song for the Lord. What an angelic and anointed voice she was gifted with from God! Evelyn received her primary education through the public school system in Hertford County and secondary education through Maury High School in Norfolk, Virginia. She furthered her education at Roanoke-Chowan Community College, at that time referred to as Roanoke Chowan Technical College in Ahoskie, North Carolina. Upon graduating, Evelyn was hired on as an Executive Secretary. While employed, she faithfully served in various other capacities until her retirement from the State of North Carolina in 2008. Her motto was, “Never stop learning so that you never stop growing.” Evelyn mastered this concept and developed a keenness for editing books, dissertations, and complex reports. Left to cherish her memories and continue her legacy are her siblings—two brothers, Wilson W. Vinson (Barbara Ann) and Jerry L. Vinson (Barbara “BB”), two sisters, Mary A. Vinson and Dr. Shirley M. Vinson, all of Murfreesboro; and her two special nephews whom she helped to raise, Dr. Jamerio E. Vinson of Florida, and Marc O. Vinson of California. Evelyn also leaves to cherish her memories four loving Aunts, Luagussie Dandy of Durham, Dorothy E. Jenkins and Zedith Vinson of Philadelphia, Olivia D. Sharp of Portsmouth; three supportive Uncles, Charles Cherry of Portsmouth, Clarence Dandy of Durham, and Gurnie Blunt of Franklin. Evelyn leaves to cherish her warm memories special adopted nieces and nephews who affectionately called her Aunt Lynn; not to omit her dear friend and sister in Christ, Sandra Long, Greensboro, and a host of very special cousins and friends. “GONE, BUT NEVER FORGOTTEN”

The family of Evelyn Vinson created this Life Tributes page to make it easy to share your memories.

Send flowers to the Vinson family.