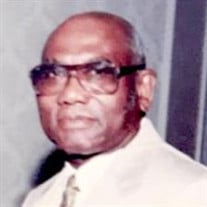 Granville Saunders, Jr. was called to his eternal rest on Sunday, June 20. 2021. Granville was born in Hobgood, North Carolina to the late Granville Saunders, Sr; and Bertha Worsley Saunders. Granville was married to Minnie Louise Harrell who died in 1989. This union was blessed with three children; Tony, Belinda, and Charles. Granville was a faithful member of Menola Baptist Church and a member of the church choir until his health failed. He was also a member of Leigh Beauty Masonic Lodge #58 in Woodland, North Carolina. Granville was a farmer until 1962 when he gained employment at Carolina Aluminum where he worked until his retirement. He lived in Menola, North Carolina until 2015 when he moved to Twin Oaks and later Twin Oaks Nursing Home. He later moved to Ahoskie Assisted Living Center where he remained a resident until his passing. Granville was preceded in death by his parents, Granville Saunders, Sr. and Bertha Worsley Saunders; his wife, Minnie Louise Harrell Saunders; two children, Tony B. Saunders and Brenda Saunders; two brothers, Andrew Ralph Saunders, and James Morris; and two sisters, Ethel Eaddy and Clementine Fennell. Granville leaves to cherish his memories: his son, Charles a Saunders (Mena) of Augusta, Georgia; his sister, Barbara Hall of Rochester, New York; two grandchildren, Tiffany M. Saunders of FT Washington, Maryland, and Charles A. Saunders, II of Maryland, and a host of nieces, nephews, cousins, and friends.

The family of Granville Saunders Sr created this Life Tributes page to make it easy to share your memories.

Granville Saunders, Jr. was called to his eternal rest on Sunday,...

Send flowers to the Saunders family.