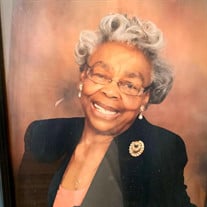 Sister Hazel Thomas Deloatch, entered into eternal rest, on Friday, February 4, 2022, at her home. She was born in Hertford County, North Carolina on March 16, 1937, to the late Whallon and Gertrude Thomas. was a caring mother, grandmother, great-grandmother, great-great-grandmother, aunt, sister, and friend. She was baptized at New Haven Baptist Church where she received her early spiritual training under Rev. Shirley Edwards. later joined First Baptist Church and was a devout Christian and a member for many years. She served faithfully as a Deaconess for more than 30 years and attended Women's Ministry meetings and all other activities where she touched and ministered to so many younger women. She also sang with the First Baptist Senior Choir for many years. Hazel provided domestic services for many families and at Chowan University for many years. After retirement, she worked in retail for Bill and Berna Fashions for six years where she assisted consistently, wherever needed Hazel loved the Lord, her family, her church, and her friends. What an awesome woman. Our beloved Hazel has gone but will forever be loved and cherished. Hazel was preceded in death by her husband, Edward Deloatch, Jr., (E.J.), her brothers, Javalin, Clinton, Oris, Crenell, and Whallon, Jr.; her sisters, Elizabeth Jernigan, Agnes, Deanie Mae Futrell, and Lina Gatling; and her daughter, Barbara Ann Deloatch. Hazel leaves to cherish her memories: five daughters, Deborah Jean Deloatch, Phyllis Deloatch, Robin Deloatch, Evelyn (Erik Latta), and Sharon Vaughan (Ronald); one son, Anthony (Glenda), reared grandchildren, Fabian (Terrell), Shameka Mincey, Lateefah Deloatch, and Ronald Deloatch; grands, great,-grands, and great-great-grands; one brother, Lloyd Thomas (Francis); and a host of nieces, nephews, cousins, two special friends Sister Margaret Graines, and Rev. Berna Stephens.

Sister Hazel Thomas Deloatch, entered into eternal rest, on Friday, February 4, 2022, at her home. She was born in Hertford County, North Carolina on March 16, 1937, to the late Whallon and Gertrude Thomas. was a caring mother, grandmother,... View Obituary & Service Information

The family of Hazel Thomas Deloatch created this Life Tributes page to make it easy to share your memories.

Send flowers to the Deloatch family.