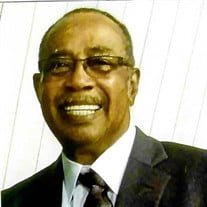 James Timothy Britt, Master Sergeant, US Army, Retired, transitioned to eternity on April 4, 2020. James Timothy affectionately known as “J.T.” was born October 23, 1938 in Hertford County, North Carolina to the late Zollie Britt and Sadie Lawrence Britt. J.T. received his education and graduated from C.S. Brown High School located in Winton, North Carolina. After he graduated he entered the United States Army serving at Ft. Campbell, Kentucky, the 82nd Airborne Division, Fort Bragg, NC as an Army Recruiter, Newark, NJ and in Field Artillery, Nuremberg, Germany. He also served in the Vietnam War. James diligently served and retired after 22 years with the U.S. Army. After being stationed in several places in the United States and abroad, he chose to retire in his hometown of Murfreesboro, North Carolina. Following his retirement from the armed forces he went on to work at Union Camp, also known as International Paper located in Franklin, Virginia and retired from there as well, after many years. James had an exceptional work ethic and continued to work as he managed Wactor Gardens which is a retirement community located in Ahoskie, North Carolina. During his youth he became a member of Parkers Grove Missionary Baptist Church, Mapleton, North Carolina and after serving his country, he returned to the church and was apart of the Diaconate for many years. J.T. had a niche for learning and researching information in general but especially studying the Word of God. He enjoyed it so much that he attended Door Life Bible Institute where he graduated with a certification in Evangelism. He was currently a member of Mt. Sinai Missionary Baptist Church, Como, North Carolina where he also served on the Diaconate Staff and taught bible study until he transitioned from that role. James loved fishing, technology, all kinds of gadgets and being a part of the 12 Sportsman and other numerous clubs within the community. He enjoyed gardening and maintained an impeccable garden for some time. He also took pride in making sure that both his yard and his cars were well kept. James was preceded in death by his parents Zollie and Sadie Britt and his brother Linwood Britt. James married Marie E. Barnes on May 7th, 1960 and to this union 3 children were born. He leaves a legacy and fond memories to his wife, Marie Britt of the home; Daughters, Sharon Chappel of Como, NC, Vera Britt of Baltimore, Maryland and Jaqueline Potts of Rex, Georgia; Four Sisters, Mary L. Brett, Helen B. Edwards Thomas (John), Erma Gorham (Arnold) and Lisa Fleming (Raymond); One Brother, Zollie Britt; Five Grandchildren, De’Shon Whitaker, La’Von Woods, Asia Potts, Sha’Mil Chappel and Kayla Potts; One Great Grandchild, Chase Marquardt and a plethora of nieces, nephews, cousins, other relatives and friends whom he loved.

The family of James Timothy Britt JT created this Life Tributes page to make it easy to share your memories.

Send flowers to the Britt family.