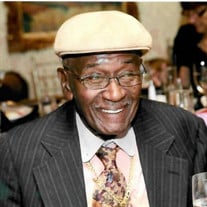 On June 30, 2020, James B. Cooper (Cutter, JB, Jimmy) transitioned to his new life. At an early age, Cutter moved to New Jersey, where he resided most of his life. He later returned home and reunited with his home church, where he attended... View Obituary & Service Information

The family of James B Cooper created this Life Tributes page to make it easy to share your memories.