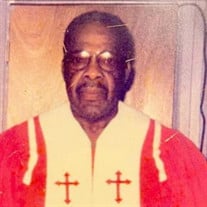 Joe Henry Stevenson, son of Jessie Stevenson and Liddie Miles was born on December 21, 1931, in Pendleton, North Carolina. He was called from labor to reward and received his wings on September 14, 2021, at approximately 8:10 in the evening at Holy Cross Hospital, Silver Springs, Maryland. Joe grew up in a very loving and caring family; one of seven siblings. He was raised on the farm with his parents, who were sharecroppers, and his siblings. His nickname was *Buddy*. Joe attended and completed eighth grade at Macedonia Segregated School. Joe was a very industrious person and possessed a great work ethic. He was gainfully employed over the years and his work experience record began as a Truck Driver, Safeway, and was called to ministry. Joe was united in marriage to Lucille Gatling and from this union raised three sons and three daughters. He was a happy outgoing individual who loved to laugh and talk. He gave good advice and counseling. He enjoyed watching television, sports and really loved watching westerns. He enjoyed eating, but his favorite meal was fried chicken and fried fish. When the spirit hit him in church, people notice that his shout was peculiar. He enjoyed preaching the word and singing. His favorite song was "I'm Not Going To Let Nobody Turn Me Around", and "I Sign My Hand To The Gospel Plow". On April 4, 1974, Joe was called to the ministry under Overseer Lucille Stevenson. He was ordained by Apostle E.W. Waiters. Bishop and Overseer Stevenson, Evangelist Malinda Bennett, and Apostle Felder founded and established churches in the following locations: Goldsboro, North Carolina, Woodland, North Carolina, Potty Casey, North Carolina, Murfreesboro, North Carolina, Washington DC., and Philadelphia, Pennsylvania. They also established and open two Missionary building locations in Franklin, Virginia, and Freemont, North Carolina. Joe was preceded in death by his parents, sisters Eula Mae, Bessie Parks, Thelma Parker, and brothers Bordage, Columbus, and Jerry Stevenson, Richard Long, Jean Porter, Leroy Long, Jr., and Mattie C. Long-Wills, and (1) grandson Norman Long. He leaves to cherish his memory: loving daughter Evangelist Malinda Bennett; son Donald Long, seven grandchildren: Karen, Zabra, Tashia, Patrice, Shareen, Laneese, and Shoniece; (11) great-grandchildren, and a host of other relatives, and friends.

Joe Henry Stevenson, son of Jessie Stevenson and Liddie Miles was born on December 21, 1931, in Pendleton, North Carolina. He was called from labor to reward and received his wings on September 14, 2021, at approximately 8:10 in the evening... View Obituary & Service Information

The family of Bishop Joe Henry Stevenson created this Life Tributes page to make it easy to share your memories.

Send flowers to the Stevenson family.