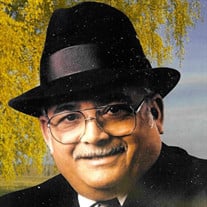 John Williams ''Bo" Brown was born on April 22. l 937, in Cofield, North Carolina to William Jennings Brown and Mary Kaye Reynolds Brown. He departed this life on September 1, 2021, at Carolina Pines Regional Medical Center. As a young man, he became a member of Philippi Baptist Church. After he moved to South Carolina, he became a member of Jerusalem Baptist Church, where he served until his illness and death. "Bo", as he was lovingly called, was a devoted and loving husband, father, grandfather and great grandfather. He loved cooking BBQ and making homemade wine. In addition to preparing delightful meals and beverages, Bo also enjoyed woodworking in his spare time. Creating one of a kind pieces were not only a hobby but provided him with an opportunity to use his skills to share with others. Bo had a special relationship with his great-granddaughter, Barii and his best friend, Mr. Layton Swinney, The bond and memories shared shall not only be everlasting but shall be the solace in the days ahead. He leaves to cherish his memories his wife, Janice of 31 years; four children, Mary Louise Cherry, of Ahoskie, James Brown of Ahoskie, NC, Wanda (Ronald) Gail Copeland of Emporia, VA, and John W (Vic) Brown, Jr. of Washington, DC; two step-children, Tracey White of Hartsville, South Carolina and Rodney White of Newport News, Virginia.; four sisters, Margaret Elaine Montgomery, Dorothy Ann (Melvin) Moore, Sue Rankins and Shirley (John) Askew all of Cofield, North Carolina, three brothers, Calvin (Mattie) Brown of Brownsville, New Jersey, Richard (Sylvia) of Murfreesboro, NC and Donnie (Adrienne) Moore of Chesapeake, Virginia; two sister-in-law's, Jannie Brown of Tappahanock, Virginia and Shirley Newsome of Cofield, North Carolina, seven grandchildren, nine great-grandchildren and a host of nieces, nephews, and other close relatives and friends. Bo shall be missed greatly by all of his family, friends, and associates.

The family of John W Brown created this Life Tributes page to make it easy to share your memories.

Send flowers to the Brown family.