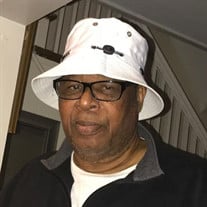 John Richard Myrick was born on November 17, 1939 in Halifax County, North Carolina, to the late Julia Mae Gatling and Johnnie Richard Myrick. While here on earth, he was graced with God's blessings for 79 years. On September 12, 2019, Richard... View Obituary & Service Information

The family of John Richard Myrick created this Life Tributes page to make it easy to share your memories.

Send flowers to the Myrick family.