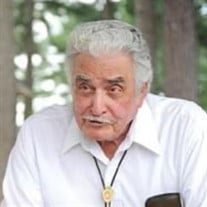 Kenneth Preston Hall (KP) departed this life on February 12, 2021, at his residence in Shannon, North Carolina. KP was born on January 30, 1935, in Hertford County, North Carolina to the late Mattie Brown Sears and Thomas Henry Hall. He was... View Obituary & Service Information

The family of Kenneth Preston Hall created this Life Tributes page to make it easy to share your memories.

Send flowers to the Hall family.