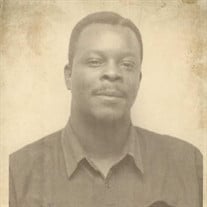 Larry McKinley Jenkins was born in Hertford County NC on June 28,1953 to the late Victoria Freeman and McKinley Jenkins. He was strong and determined even in his last days as he retired and became physically disabled. Larry graduated from Murfreesboro High School in 1971 and enlisted in the United States Air Force in August 1971. Larry was honorably discharged from the US Air Force on June 22, 1979. While in the USAF he attended the University of Maryland and ITT Technical Institute of Phoenix where he studied Computer Electronics Engineering. He used these skills as an Electrical Specialist in the Air Force. He worked at Ahoskie Yarn as a mechanic and The News Herald as a supervisor in the early nineties. Larry was a member of Nebo Baptist Church until his death on April 19, 2022. He enjoyed singing in the choir and fellowship with other members. H loved watching sci fi movies, tennis games, and basketball. He had a passion for fashion. He was kindhearted and caring. He loved taking care of his family and making people laugh. Larry leaves to cherish his memories his beloved wife Patricia, sons Christopher Deloatch (Shaletha) of Miami, FL, Larry Jenkins Jr. of Phoenix AZ, Jonus Deloatch of Murfreesboro NC; Daughters: Layle Thomas (Ronald) of Durham NC, Cherie McKizia (Gregory) of Dallas TX, Janisha Jenkins of Phoenix AZ, Abara Johnson of Greensboro NC, and Tamala Hendrix (Michael) of Phoenix, AZ; Sisters: Margaret Saunders (Rodney) of Carrolton VA, Clintonia Jackson (Eric) of Norfolk VA, Sylvia Anderson (Michael), Cynthia Bishop, and Phyllis Cowper all of Murfreesboro NC; and Brothers: Melvin Jenkins (Lisa) of Fayetteville NC, Ricky Jenkins (Sandra) of Murfreesboro NC, Dwight Jenkins (Barbara) of Ahoskie NC, Mark Jenkins of Newport News VA, and Jimmie Newsome of Murfreesboro NC; 18 grandchildren, four great grandchildren, an aunt, Thelma Chapman; an uncle,Luke, and a host of nieces, nephews, relatives and friends. Thanks to his special friends and cousin Ulyses Vaughan, Milton Roberson, Kenneth Hall, and Steve Barnes. The family would like to thank Nebo Baptist Church for its love and support during this time. Also special thanks to all of the nurses and doctors who cared for Larry in his ongoing struggle these last few months and thanks to everyone who supported and expressed their concern.

Larry McKinley Jenkins was born in Hertford County NC on June 28,1953 to the late Victoria Freeman and McKinley Jenkins. He was strong and determined even in his last days as he retired and became physically disabled. Larry graduated from Murfreesboro... View Obituary & Service Information

The family of Larry McKinley Jenkins created this Life Tributes page to make it easy to share your memories.

Send flowers to the Jenkins family.