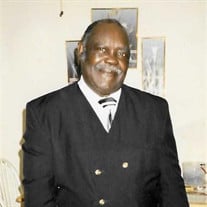 Lonnie David Boyce was born on May 11, 1931 in Chowan County, North Carolina. He was the son of the late Hattie Boyce-Hayer. Lonnie went to be with the Lord on December 26, 2019. He attended school at Corapeake School in Corapeake, North... View Obituary & Service Information

The family of Lonnie David Boyce created this Life Tributes page to make it easy to share your memories.

Send flowers to the Boyce family.