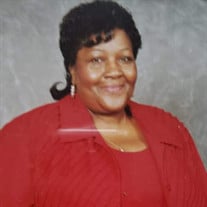 On Sunday, July 18, 2021, God in His Infinite Wisdom, saw fit to call his angel, Martha Gaither to her eternal home in Glory. Martha was the daughter of the late Joseph and Martha Stephenson. She was born on April 1, 1945, in Murfreesboro, North Carolina. Martha attended Riverview School in Murfreesboro, North Carolina. She was employed at Freewill Cogic in Brooklyn, New York, as a cook for a while, and later remaining in the home, taking care of her family. Martha was married to the love of her life, Carl Gaither of Murfreesboro, North Carolina. To this union, six children were born. Martha loved the Lord and was an active member of Freewill Church of God in Christ in Brooklyn, New York, where she sang in the choir and served as a faithful member until she relocated to Murfreesboro, North Carolina. Martha joined Mt. Sinai Church of God under the leadership of Elder Arthur Clark. At Mt. Sinai, she joined the missionary board and sang Soprano in the choir. She attended events with her church and was very supportive, helping wherever she was needed. Martha later joined Nebo Missionary Baptist Church with her husband, Carl Gaither, under the leadership of Pastor James K. Brown. Here she served faithfully as a member until her health declined. Martha was known for her beautiful spirit, walking down the road, singing, "I Need Thee". Martha was preceded in death by one daughter, Everette Gaither; one grandson, Albert Jamison, Jr.; four brothers, Willie C. Stephenson, Sr., Joseph Stephenson, Jr., Randolph Stephenson, and Jesse T. Stephenson; and one sister, Gertrude Briscoe. Martha leaves to cherish her life memories; four sons, Ricky Stephenson, Dexter Gaither (Toni) Herbert Gaither (Kim), and Jeffrey Gaither, all of Brooklyn, New York; two daughters, Bridget Henry (Andrew) and Margaret Gaither, both of Brooklyn, New York; two grandsons, Calvin Henry and Justin; one granddaughter, Jane (J.J.) of Brooklyn, New York; one brother, George R. Stephenson, Sr. of Roanoke Rapids, North Carolina; three sisters, Mollie Turner (William) of Queens, New York, Lula Mae Wiggins of Denver, Colorado, and Retta Ann Williams of Portsmouth, Virginia, and a host of nieces, nephews, cousins and family, and friends.

On Sunday, July 18, 2021, God in His Infinite Wisdom, saw fit to call his angel, Martha Gaither to her eternal home in Glory. Martha was the daughter of the late Joseph and Martha Stephenson. She was born on April 1, 1945, in Murfreesboro,... View Obituary & Service Information

The family of Martha Stephenson Gaither created this Life Tributes page to make it easy to share your memories.

Send flowers to the Gaither family.