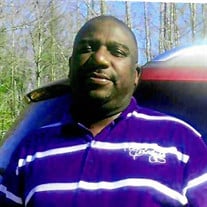 When the Lord Sweetly Whispered his name, Melvin quietly answered His call. Melvin Jerome Williams was born on July 7, 1964, to Josie Marie Williams and the late Luther Wright Powell. He departed this life on November 23, 2021, at Vidant-Edgecombe... View Obituary & Service Information

The family of Melvin Jerome Williams created this Life Tributes page to make it easy to share your memories.

When the Lord Sweetly Whispered his name, Melvin quietly answered...