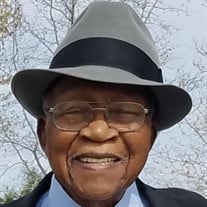 Milton's Secrets to Longevity... “Trust in God; Treat everyone as you wish to be treated; Do everything in moderation and live one day at a time; If someone disagreed with his views, He would say “Keep on living, you will see.” Milton Joseph Wiggins – Lived to be 106! And that was just one of many feats that makes his life, his legacy so amazing! He was a trailblazer of his time, possessing an unwavering entrepreneurial spirit. He was a music lover with a beautiful bass voice heard above the others in the church choirs that he sang with. He was a fighter who survived cancer and a major car accident where he fractured his neck, all after the age of 80! Affectionately known as Dad, Brother, Grandpa, Pop-Pop, Uncle Milton, or Mr. Wiggins, he went home to be with his Lord on Saturday, December 19, 2020, one month after celebrating his 106th birthday. Milton, a native of Sunbury, in Gates County, North Carolina, was born on November 19, 1914, the oldest male of 12 siblings to Aaron and Ida Wiggins. He attended and graduated from TS Cooper high school in 1934 and in 1940 he married the love of his life, the late Ethel Irene Gatling. During their 52 years of marriage they raised their 2 children, Bessie, and Milton Jr. As a young married man starting a family, Milton made the best of the limited work options in Sunbury, including farming, painting, and logging. However, to secure more stable work and to build financial security for his family, he left Sunbury for Brooklyn, New York in 1952, vowing to one day return to Sunbury to build his family home. Milton moved to the Bedford Stuyvesant area of Brooklyn, near his older siblings who had relocated a few years earlier. As a faith-filled hard worker and family man, Milton believed in himself and knew if given the opportunity, he would be successful at any job. After becoming a relied upon laborer at a factory in Brooklyn, filled with an abundance of self-confidence, he decided to leave the “security” of a regular job to pursue one of his first entrepreneurial endeavors, owning and operating a liquor store in Brooklyn. But it would be his true labor of love, landscaping and gardening that would provide for him and his family for years to come. In 1967 Milton and Irene relocated to Hackensack, NJ where he operated his successful landscaping business until he retired and sold the business in 1991 at the age of 77. Never wavering on his vow to build a house back HOME, after retirement he and Irene excitedly returned to Sunbury to live in the home, he built on Sugar Run Road, where he lived out 29 more of his 106 years. Worship has always been integral for Milton, so he and his family made First AME Zion Church in Brooklyn, NY their church home for the many years that they lived in the NY area. There he sang with the senior choir, performing in concerts and delivering many requested solos. He also served on the Board of Trustees leaving a legacy that is still remembered at the church today. Once he returned to Sunbury, he immediately immersed himself in St. John AME Zion Church in Sunbury, NC, where he sang in the choir and kept up the grounds of the church. Over the years Milton got great enjoyment out of celebrating his centennial birthday with more than 200 family, friends, church family and community leaders. He was proud to be the oldest person in the area. After his 100th birthday, he was amazed at his celebrity status in the community. He received many acknowledgments and citations from Gates County, local officials, and surrounding churches in honor of his birthday. It was a testimonial to all the lives he had touched. Even at 105 years old, he continued to drive to visit the sick, and other churches in the community and to do his own shopping. Milton showed his true spirit and love for home when he refused to leave even as his health was failing. Finally, in September 2020, he consented to move to Cincinnati, OH with his son, where he received much love and close monitoring of his health. Milton Wiggins quickly made a name for himself even in Cincinnati with his caregivers who all admired his lively and out-going spirit. Milton leaves behind a loving blended family who all loved him dearly. Daughter, Bessie Edwards of Brooklyn, N.Y and Son, Milton Wiggins, Jr (Sandra) of Cincinnati, OH. Grandchildren – Monique Gallaway (David), of Upper Marlboro MD, Marci Edwards (Robin) of Washington, D.C., Aaron Wiggins (Christine) of Atlanta, Ga., and David Wiggins (Sharda ) of Atlanta, Ga.; Great-grandchildren- Isaiah, Layla, and David Gallaway; Milton Edwards and Christopher Campbell; Caleb, Abigail, and Joshua Wiggins and Austin Wiggins, Montana Graham; and a host of nieces and nephews, grand and great-grand nieces, and nephews, cousins and friends. MAY HE REST IN PEACE.

Milton's Secrets to Longevity... &#8220;Trust in God; Treat everyone as you wish to be treated; Do everything in moderation and live one day at a time; If someone disagreed with his views, He would say &#8220;Keep on living, you will see.&#8221;... View Obituary & Service Information

The family of Milton Joseph Wiggins Sr created this Life Tributes page to make it easy to share your memories.

Send flowers to the Wiggins family.