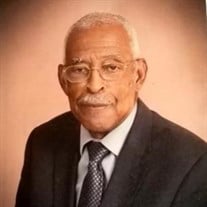 On April 22, 2021, Paul Pruden, Sr answered GOD's call and peacefully transitioned to his eternal rest. He was born July 29, 1933 to the late Caleb and Dora Pruden in Corapeake, North Carolina. In 1951, Paul graduated, at the top of his class, from the Gates County Public Schools. He then went on to further his education at North Carolina Agricultural & Technical State University and earned a Bachelor of Science Degree in Biology (Cum Laude). After his graduation from college, he was drafted into the U.S. Army where he served two years. Paul was united in holy matrimony to Fannie Jane Deloatch-Pruden on January 25, 1966. To this union, four children were born. He and Fannie raised their family first in Suffolk, Virginia; then moved to Murfreesboro, North Carolina, where he lived until his death. Paul accepted Christ into his life at an early age and joined New Middle Swamp Missionary Baptist Church. He was a faithful member until his death. Paul loved science and education. He was a Physical Science and Math teacher throughout his career. He taught high school students for 40 years. He began his career at T.S Cooper in Sunbury, North Carolina. He was so grateful and enthused for the opportunity to help shape the lives of young people. He then accepted a position at C.S. Brown High School in Winton, North Carolina. This is where he honed his craft of teaching and came up with his, now iconic, "You may leave!" quote. He, along with the principal there, came up with the plan to get the more "rowdy" student under control. That evolved into something that he could not believe... His students LOVED it. Even the ones that he never sent out of his class, would say that they were. He taught the majority of his years at Murfreesboro High School. He retired from Hertford County High School in 1994. Paul was preceded in death by his father and mother, Caleb and Dora Pruden. Also by his grandson, Pruden Holley, and by his son-in-law, Karl Johnathan Holley, Sr. Paul leaves to cherish his memory: his loving wife Fannie; three daughters: Laverne Gray of Como, North Carolina.; Gillian Boone of Mechanicsville, Virginia.; Paula Holley of Winton, North Carolina.; one son, Paul Pruden, Jr. (Keischa) of Ahoskie, North Carolina; one brother: William Welch of Edenton, North Carolina.; seven grandchildren: Jevone L. Gray (Rachel) of Colorado Springs, Colorado; Stacey A. Boone of Mechanicsville, Virginia; Karla S. Holley of Greensboro, North Carolina; Karl J. Holley and Kaleb J. Holley both of Raleigh, North Carolina; Aaron J. Pruden and Bryant C. Pruden both of Ahoskie, North Carolina; four great-grandchildren: Dominic, Sebastien, Deziree Gray all of Colorado Springs, Colorado; Troy Townsend of Mechanicsville, Virginia; three sisters-in-law; Margret Rogers and Etta Skinner both of Suffolk, Virginia; Vivian White of Portsmouth, Virginia; two brothers-in-law; Joseph Deloatch of Oxen Hills, Maryland; John Deloatch of Suffolk, Virginia; and a host of nieces, nephews, cousins, and friends.

On April 22, 2021, Paul Pruden, Sr answered GOD's call and peacefully transitioned to his eternal rest. He was born July 29, 1933 to the late Caleb and Dora Pruden in Corapeake, North Carolina. In 1951, Paul graduated, at the top of his class,... View Obituary & Service Information

The family of Paul Pruden Sr created this Life Tributes page to make it easy to share your memories.

Send flowers to the Pruden family.