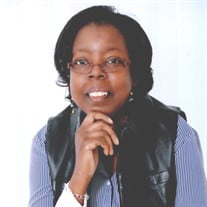 Phyllis Cooper transitioned to her heavenly home on Wednesday, March 4, 2020 after a lengthy illness as the result of having sickle cell disease. She was born on May 2, 1963 to the late Clarence Cooper, Sr. and Nancy Myrick Cooper of Como, NC. She is a 1981 graduate of Murfreesboro, NC. After completing high school, Phyllis attended Chowan College until her illness kept her from receiving a degree. She has lived and worked in Washington, DC, Maryland and Virginia over the years. She later moved back to her home in Hertford County North Carolina, where she attended and earned an Associate's Degree in Computers at Roanoke Chowan Community College. After her degree, she was employed by Roanoke Chowan Community College and Hertford County Public Schools as a computer technician. She worked with Hertford County Public Schools until her health declined. Even though Phyllis' illness was a major challenge in her life, she lived a very full and productive life. Phyllis dedicated her life to Christ at an early age and joined Mill Neck Baptist Church in Como NC. She later became a member of New Beginnings Missionary Baptist Church of Murfreesboro, NC where she remained a dedicated member until her death. After moving to Kinston, NC, Phyllis became a special attendee of Emmanuel Hill Baptist Church where she was highly supported by the church family. Phyllis was quite an artist who enjoyed drawing, making jewelry and building model cars, and boats. As a lover of computer technology, she often surrounded herself with various computer-gadgets and would assist many in Hertford County with their computer needs. She leaves to cherish in her memory: 4 Sisters - Joyce Milteer (who preceded her in death), Carolyn Cooper and Ernestine Britt (William) of Como, NC, Maxine Cooper of Kinston NC; 2 Brothers - Clarence Cooper Jr. (Sharon), Glenwood S. Cooper of Indianapolis, Indiana; 1 surviving Aunt, Shirley Whitehead of Como NC; and a host of nieces, nephews, relatives and friends.

Phyllis Cooper transitioned to her heavenly home on Wednesday, March 4, 2020 after a lengthy illness as the result of having sickle cell disease. She was born on May 2, 1963 to the late Clarence Cooper, Sr. and Nancy Myrick Cooper of Como, NC.... View Obituary & Service Information

The family of Phyllis Cooper created this Life Tributes page to make it easy to share your memories.

Phyllis Cooper transitioned to her heavenly home on Wednesday,...