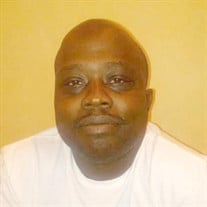 Randy Beale, was born on January 13, 1979, to Emma J. Beale and George W. Holley. On Sunday, October 31, 2021, at Vidant Roanoke-Chowan Hospital in Ahoskie, North Carolina, God sent for another one of His Angels to join Him. Randy attended the... View Obituary & Service Information

The family of Randy Beale created this Life Tributes page to make it easy to share your memories.

Send flowers to the Beale family.