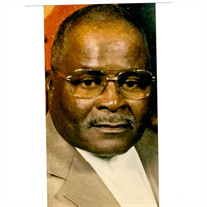 Deacon Emeritus Robert L.. Jordan was born on January 30, 1937, to the late Tom and Ella Jordan. He was called home to be with the Lord early on Sunday morning, December 19, 2021. Deacon Emeritus Robert L. Jordan accepted Christ at an early age and joined Parker's Grove Baptist Church. He was a faithful member and served in many Ministries. However, his passion was working with the Youth Ministry and leading youth to Christ was his goal. He was a dedicated member until his health failed. Robert received his education in the public schools of Hertford County. He was employed by Newport News Shipbuilding and Drydock Company in Newport News, Virginia where he worked as a crane operator and pipefitter until he retired after 45 years. Deacon Robert L. Jordan leaves to cherish his memory; his wife, Minerva of Fifty Nine (59) years of marriage; one daughter, Kim J. Lane (Linwood) of Greenville, North Carolina; two sons, Robert E. Jordan (Lisa) of Gates, North Carolina, and Gregg Jordan (Hattie) of Murfreesboro, North Carolina; one brother, Joel Jordan of Murfreesboro, North Carolina; eight grandchildren, Chris, Ebony, Jordan, Andrell, Amber, Aaron, Justin, and Donte'; eight great-grandchildren, nephews, nieces, and other family and friends.

The family of Deacon Robert Lee Jordan created this Life Tributes page to make it easy to share your memories.

Send flowers to the Jordan family.