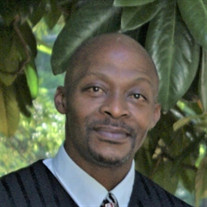 Samuel Joseph Holley "Sam" was born April 29, 1963 in Murfreesboro, North Carolina to Sarah and the late Edward Holley. Our beloved son, brother, uncle and friend departed this life on Saturday, February 15, 2020. Sam joined Parker's Grove Baptist Church at an early age. He was a member of the Parker's Grove Junior Choir and the Junior Missionaries, and he was also a member of the Usher Board. During his formative years, Sam was a faithful member of Parker*s Grove. Samuel attended Murfreesboro High School where he was president of the Senior Class, a member of the Drama Club, and the high school chorus. He was a member of DECA and FBLA. Sam was always interested in the area of Fine Arts, namely the Performing Arts. He fervently worked to achieve a career in show business. He participated in school activities that assisted in his success. Sam loved to sing, dance, and act. He always wanted to learn to play the piano. His learning to play the piano spurred him to practice, and he learned to play by ear. He also took lessons with various teachers. The most important factor in Sam*s life was his religion. His religion was the beginning of his awareness and a driving force of his life. He participated in plays on Murfreesboro High School*s campus and on the Chowan College campus. Sam graduated from Murfreesboro High School in 1981. Sam was preceded in death by his father, Edward Holley and his brother Karl Jonathan Holley. He leaves to cherish his memory; his mother Sarah Holley of Murfreesboro, NC. Five brothers Gary Holley, Melvin Holley (Tammy), George Holley, and Tony Holley all of Murfreesboro, NC, and Mark Holley (Vanessa) of Weeki Wachee, Florida; two sisters Ava Holley Closs of Raleigh, NC and Vivian Holley of Wake Forest, NC and sister in law, Paula S. Holley and a host of nieces, nephews, relatives and friends.