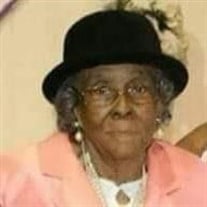 The Life of a Virtuous Woman- Sarah Lee Barham Jones received her angel wings on Saturday, January 2nd, 2021. Sarah Lee was born on Sunday, July 7th, 1929 to the late Mamie and Freeman Barham, Sr. on Barham Road in Como, North Carolina. She was the second child of six children. At an early age, she learned the value of hard work on the family farm. She would have to wake up early to help on the family farm before attending school. Sarah received her early education at Mount Sinai and Mill Neck School. She also attended Calvin Scott Brown High School in Winton, North Carolina. In the 1950s, Sarah and her late brother, Leslie received their GED. Christianity was very important to her family, so she joined Mount Sinai Baptist Church at age 12. During her youth, she ushered and participated in the choir. As an adult, she served as an usher, the Ebony Club secretary, and a member of the Kitchen Ministry. She loved her church very much and attended as long as she could. In May of 1966, she married the love of her life; the late Charlie Jones. They were married until his death on September of 1985. Sarah was a great cook and an awesome seamstress. She made clothes and offered alterations for many years. She worked as a housekeeper for the Taylor Family, a babysitter, and a private duty caretaker for the Howell Family. Sarah loved her family and she enjoyed spoiling her grandchildren. Sarah had health challenges, but she still had her sense of humor. She enjoyed joking with her friends and family. Sarah was preceded in death by her parents, her husband, and her siblings- Ruth Banks, William, Leslie, and Freeman Barham. Those left to cherish her memory are: three daughters; Mary Virginia Blythe, Sarah Beatrice Robinson, and Shirley Yvonne Worthington; six grandchildren, George Williams, Ashley Williams, Jonathan Robinson, Jason Robinson Christopher (Chris) Jones (wife-Latia), and Cory Worthington; her Sister-Mamie Edna Sugars; two sisters-in-law, Betty Jones Parker and Gladys Barham; a host of special nieces, nephews, cousins, and friends that she loved dearly. Sarah will be missed, but we will see her again according to the words in 1st Thessalonians 4:13-18! "A beautiful rose was plucked!"

The family of Sarah Jones created this Life Tributes page to make it easy to share your memories.

Send flowers to the Jones family.