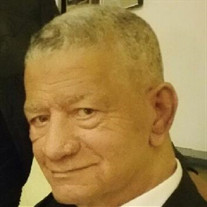 Sherman Britt departed this life on January 30, 2019 at Obici Hospital in Suffolk, VA. He was born on March 25, 1943 to the late Effie Britt and Lewis Daniels of Cofield, North Carolina. Sherman served in the US Army as a medic. He was a trustee... View Obituary & Service Information

The family of Sherman Britt created this Life Tributes page to make it easy to share your memories.

Send flowers to the Britt family.