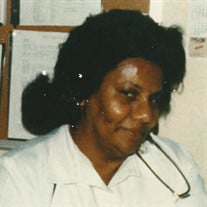 On April 30, 2020 God looked around for some help. He needed a special type of woman. He looked for a virtuous woman. He chose Thelma M. Whitaker, and presented her with wings. Thelma was born on January 5, 1927 to the late George and Etta White of Charlottesville, Va. Life wasn't easy for Thelma. By the age of 12 yrs old she had lost both parents. She was raised by her stepmother, who constantly put her down. She was determined to be somebody. She finished Jefferson High School at age 16. She was determined to be a nurse. She wanted to serve others. She attended Dixie Nursing (Hampton University). She became a registered nurse. She worked for Dr. Ashby, Whitaker Memorial Hospital, Mary Immaculate Hospital, and MacDonald Army Hospital, Ft. Eustis, Va. By 32 she became the 1st African-American civilian supervisor. She worked nights, therefore she was 'in-charge". She took her job seriously. She traveled 30 mins daily, to work and back. She never took days off. She retired in 1985 with 18 months worth of sick leave. Thelma was an avid reader, and an exceptional writer. She had a thirst for learning new things. You could find her , working, puzzles or reading Taylor Caldwell or Jackee Collins novel. She enjoyed, water activities enough she couldn't swim, riding motorcycles, and good conversation. In 1953, while walking across the street, she met the love of her life, Mr. Eunique "Nic" Whitaker. After year of dating, they got married in June 16,1954. A new adventure began. In this union she had 2 children, Roger Carlton (deceased) and Lisa Karen Whitaker Taylor. Her life was full, but at age 64 it changed. For her birthday that year she got a grand baby. She bought joy to her life. They were 2 peas in a pod. Thelma was a member of the following: Hampton University Nurses Alumni Association, Chi Eta Phi nursing sorority, Eastern Star Rose Chapter, Orcutt Homes Senior Citizens, Macedonia Senior Citizens, Macedonia Deaconess Board, Area Council, and Newport News Retired Policeman's Wives. She was a loyal and faithful member of Macedonia Baptist Church. Church was important to Thelma. She learned early to love the Lord. She was preceded in death by her husband, of 55 yrs and her only son She leaves to cherish her loving memories, one daughter, Lisa Karen Whitaker Taylor, one very special loving grand-daughter Danielle B. Taylor, a sister Juanita Jones of Charlottesville, Va, four nieces Joyce Nelson of Upper Marlboro, Md Jacqueline Nelson of Charlottesville, Va, Charlene(Michael)Williams of Charlottesville, and Peggy Jones of Beltsville, Md, two great nephews Abdur Muhammed (Fatma)and Dedrick (Jivannia) Nelson, three great-great nephews and one great-great niece .one A Godchild, Wilhelmenia "Cissy" Francis and a very special caretaker Anne Epps. A host of relatives and friends. The family wishes to express our appreciation for prayers, calls, and random acts of kindness, extended during this time of bereavement. A special thanks to the professional staff at Unity Medical Center, especially Doctors Momo and Gebran.

On April 30, 2020 God looked around for some help. He needed a special type of woman. He looked for a virtuous woman. He chose Thelma M. Whitaker, and presented her with wings. Thelma was born on January 5, 1927 to the late George... View Obituary & Service Information

The family of Thelma Margaret Whitaker created this Life Tributes page to make it easy to share your memories.

Send flowers to the Whitaker family.