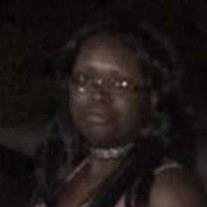 Veronica Shante' Ellis was born on July 3, 1989 in Hertford County to the late JamesLee Ellis and the late Virginia Lassiter. Veronica was called to rest on Wednesday, July 17, 2019 at UNC Hospice Home in Pittsboro, NC. She attended Hertford... View Obituary & Service Information

The family of Veronica Shante' Ellis created this Life Tributes page to make it easy to share your memories.

Send flowers to the Ellis family.