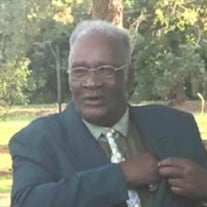 William Earl Holloman was born on March 31, 1951 in Cofield, North Carolina to the late John and Daisy Holloman. William Earl was educated at C S Brown School in Winton, North Carolina. He was a farmer at heart, for many years. One of his... View Obituary & Service Information

The family of William Earl Holloman created this Life Tributes page to make it easy to share your memories.

Send flowers to the Holloman family.