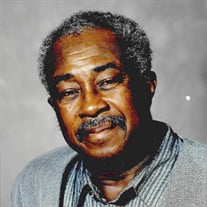 William Claude Smith, Sr. was born on August 11,1938 to the Late Frank Emmitt Smith and the Late Norrine S. Smith. He departed his earthly life on March 03, 2020 at 11:00 AM at Vidant Roanoke Chowan Hospital in Ahoskie, NC. He joined Stoney Branch Baptist Church at an early age. He was a loving husband, father, grandfather, uncle, cousin and friend. He was known by many names: Buddy, Steel Bill, Smitty and many more. William attended Buckland School in Gates, NC. He worked as a Logger until 1960. He then became employed at Newport News Shipyard in Newport News, Va., as a Welder until his retirement in 2000. He was a hardworking man who loved his family dearly. There was nothing too big or too small that he wouldn't do for his family. He enjoyed putting things together, which included his craft of welding. He enjoyed frequent cookouts and family get togethers at his home. He was the life of the party. He was full of love and instilled wisdom in those around him. William leaves to cherish his memories: his wife Ida Pearl Smith of 60 years; three sons, William Claude Smith, Jr, of Richmond, VA, Johnny M. Smith (Felicia) of Ahoskie, NC and Derrick Griffin of Franklin, Va.; four Grandchildren, Melissa Smith, Amber Smith, Marcus Smith, and DaeQuez Griffin; ten great grandchildren; four sisters, Mary Morris, Margie Copeland, and Mamie Wilson (McKinley) all of Eure, and Shirley Howell (Billy) of Holland, Va.; one sister-in-law, Carol Overton of Chowan; two Brothers-in-law, Charlie Eure, of Eure, and Joseph Overton of Brooklyn, New York and host of nieces, nephews, cousins, and friends. * William was preceded in death by two brothers, Frank Emmitt Smith, Jr. and James Smith; one Sister, Hazel S. Eure; six brothers-in-law, Felton Morris, Raymond Copeland, Lewis Overton, Bill Overton, and John Overton; three Sisters-in-law, Casey Bentley, Estine Rountree, and Lizzie Griffin.

William Claude Smith, Sr. was born on August 11,1938 to the Late Frank Emmitt Smith and the Late Norrine S. Smith. He departed his earthly life on March 03, 2020 at 11:00 AM at Vidant Roanoke Chowan Hospital in Ahoskie, NC.... View Obituary & Service Information

The family of William Claude Smith Sr created this Life Tributes page to make it easy to share your memories.

Send flowers to the Smith family.