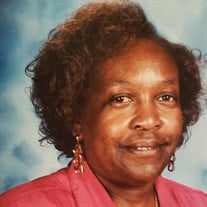 Yvonne Jenkins Manley "Blue" was born May 14, 1938, to the late Hersey J. Jenkins and Beatrice Gatling Jenkins in Hertford County, North Carolina (Mapleton Township). Yvonne was the baby of 12 children (8 girls and 4 boys) born to Hersey and Beatrice Jenkins. Her mother*s brother Pompey gave her the nickname *Miss Blue" but her parents and siblings called her “Blue”. At an early age she accepted Jesus Christ as her Lord and Savior and joined and attended Parker’ Grove Missionary Baptist Church. Yvonne attended public schools in Hertford County. After graduating from Calvin Scott Brown High School, Winton, North Carolina, she got married and to this union one son was born, Sebastian (Stepp) Newsome. Later in life she furthered her education by attending Winston Salem State University, Winston Salem, North Carolina for a year. She then relocated to New York where her father*s brother Herbert lived and worked for the New York Police Department for a number of years. After the death of her mother, she returned home to be near her father and son. She then worked at Riverview Elementary School, Murfreesboro, North Carolina as a Teacher*s Assistant. She loved working with the children so much she decided to attend college at Elizabeth City State University, Elizabeth City, North Carolina. She obtained a Bachelor of Science Degree in Elementary Education with a concentration in grades K-6. She also became a member of Delta Sigma Theta Sorority. While at ECSU, she worked as a switchboard operator there. She would call her parents and sister, Montrose every night while she was working as a switchboard operator to see how her son and everyone in the family was doing. After graduating from college, she became gainfully employed with the Suffolk City School System for a total of 28 years. While working in the school system, she attended and graduated from Old Dominion University, Norfolk, Virginia where she received her Masters Degree in Elementary Education. Yvonne had a passion for singing. She sang at various churches in Virginia and North Carolina. , including: Parker’s Grove Missionary Baptist Church, Calvary Missionary Baptist Church, First Baptist Powellsville, Mount Moriah Missionary Baptist Church, Philippi Baptist Church, Zoar Baptist Church (Boykins, Virginia) and Odom Chapel Baptist Church (Newsoms, Virginia) until her voice would not allow her to sing as strong as she used to. Her favorite song was "God Has Always Stood by My Side". Whenever she was asked to sing at a funeral, if the family did not have a song in mind, she would sing her favorite song. She was member of the Order of Eastern Star Chapter Dorcas # 97, Winton, North Carolina Besides her parents preceding her in death: 6 sisters: Callie Beatrice Jenkins, Rosetta J. Jenkins, Hollie J, Vaughan, Montrose J. Hall, Lacy Vivian J. Mack and a baby girl who died at birth; 4 brothers: Ralph Howard Jenkins, Jasper Pompey Jenkins, Hersey Calbert (Calvin) Jenkins and James Ronald Jenkins. Yvonne leaves to cherish her memories: a loving son, Sebastian (Stepp) Newsome; a loving and caring daughter-in-law, Lavette Newsome; a grandson, Lionel Dube (Barbara Murrell); 4 great-grand children: La’Niece Dube (the apple of her eye), Kaleah Williams, Laila Dube and Abel Dube; 3 bonus grandsons: Ronald Coates, Darryl Barrett and Deaundre Deans; 4 bonus great grandchildren: Ariana Coates, Alyssa Coates and Chaylen Barrett, Aaliyah Murrell; a niece whom she considered as a daughter and was a second mom to Charmont H. Stephen (Gilbert); her sister R*Dell J. Speller; a friend whom she called her son, Pastor Darrell T. Partlow (Romona); a host of nieces, nephews, cousins and friends.

The family of Yvonne Jenkins Manley "Blue" created this Life Tributes page to make it easy to share your memories.

Send flowers to the Manley family.